Infrared Cameras Inc has facilities for infrared camera calibration as well as repair for all ICI infrared thermal imaging cameras and products. Full Calibration is available for almost every “flir” (forward looking infrared) thermal imaging camera on the market today. Our professional staff can calibrate your infrared camera to NIST and PTB standards. It is recommended that you re-calibrate your camera every year for maximum performance and to ensure accuracy. Each calibration comes with a calibration certificate.

A temperature reference source is an idealized physical body that absorbs all incident electromagnetic radiation, regardless of frequency or angle of incidence. When in constant equilibrium, the device emits electromagnetic radiation which is emitted according to Planck’s law, meaning that it has a spectrum that is determined by the temperature alone (see figure at upper right), not by the body’s shape or composition. A white body is one with a “rough surface [that] reflects all incident rays completely and uniformly in all directions.” A temperature reference in thermal equilibrium has two notable properties:

An approximate realization of a black surface is a hole in the wall of a large enclosure (see below). Any light entering the hole is reflected indefinitely or absorbed inside and is unlikely to re-emerge, making the hole a nearly perfect absorber. The radiation confined in such an enclosure may or may not be in thermal equilibrium, depending upon the nature of the walls and the other contents of the enclosure. Real materials emit energy at a fraction—called the emissivity — of temperature reference energy levels. By definition, a temperature reference in thermal equilibrium has an emissivity of ε = 1.0. A source with lower emissivity independent of frequency often is referred to as a gray body. Construction of temperature reference with emissivity as close to one as possible remains a topic of current interest. 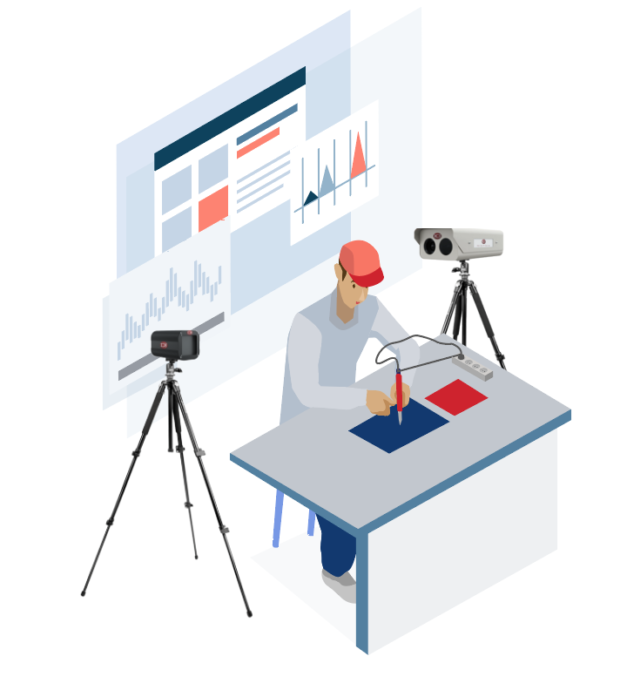 Re-calibrate every year for maximum accuracy

Your industry leader since 1995

For 25 years and counting, ICI has proven to be an innovative pioneer in infrared technology.
We commit to a reputation of excellence in our product innovation and the highest quality service on the market.

We’re here for you. Get in touch today for any general inquiries.