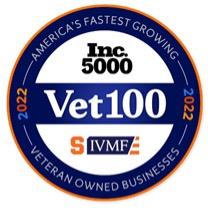 Beaumont, Texas (April 4, 2022) – Infrared Cameras Incorporated (ICI) has been named to the fifth annual Vet100 list, created by Inc. 5000 in partnership with Syracuse University’s Institute for Veterans and Military Families (IVMF). The list highlights the United States’ fastest growing veteran-owned and veteran-operated businesses named in the Inc. 5000 list of the fastest-growing private organizations in the U.S.

Originally a list of 50 organizations, this is the third year since the list was expanded to include 100 companies in an effort to further highlight the economic prosperity being driven by U.S. veterans. “Economic prosperity is so important to so many aspects of American life, from home and main street to even our standing in the world,” said Scott Omelianuk, Inc.’s Editor in Chief. “Given that prosperity is driven by small business, and given, we now know, the impact Veteran founders have on that small business, we can only continue to recognize them and say, again, thank you for your service.”

ICI’s founder and CEO, Gary Strahan, served in the United States Navy from 1977 to 1981, where he was a Hull Technician and Diver. After being honorably discharged, Strahan worked in various roles at General Dynamics (San Diego CA), Campbell’s Shipyard (San Diego CA), Mobil Oil (Texas), ASC, before founding ICI in 1995. After leaving Mobil Gary worked as an Agema manufacturers representative, Agema and Flir merged in 1998, Gary worked directly for Flir after the merger and left to develop the ICI systems and software that exist today. “ICI is extremely proud to be recognized for our rapid growth, both in terms of revenue and innovation, allowing ICI to be number twenty-three on this prestigious list of 100 great organizations,” said Strahan. “We have an excellent team of professionals here at ICI and have built a great culture centered on core values of ethics, respect, honesty, and continuous improvement. These are values that are also present in our United States armed services and were consistently reinforced during my time in the Navy.”

The Inc. 5000 was founded in 1982 listing 500 of the fastest-growing privately held companies in the United States. For 40 years, this prestigious list has featured many of the nation's most successful private companies and has become synonymous with success and entrepreneurship.

Infrared Cameras Inc has been a leader in developing and manufacturing innovative Medical, industrial, Drone, Aerial, Veterinary (Digatherm, Ocala FL), imaging technology systems and software since 1995. Veteran-owned and based in Beaumont, Texas, ICI offers complete infrared solutions, including equipment, custom designs, software, calibration, training, and more. The company's mission is to develop the most sensitive, accurate, and competitively priced infrared cameras and software in the world. To learn more about Infrared Cameras, visit www.infraredcameras.com or follow ICI on Twitter, LinkedIn, YouTube and Facebook.

Looking for more info?
Why wait!

We’ll reach out to help you find the solution that’s right for you, send you product info and more. Just give us your email. It’s that easy!

Demand for infrared temperature screening systems is up drastically due to coronavirus infections. ICI is doing all that it can to fulfill all orders and play a major role in stopping COVID-19. Fill out the form below to request a quote on our thermal imaging devices.